Indenture in the World

British imperialism during the early 16th until late 19th centuries led to the migrations of natives from the Asian and African continents to several British colonies across the world. Many of them were either traders or labourers in search of a better life. Several modes of recruitment were noted and those operating under private enterprises were described as being fraudulent, coerced and abusive such as the kidnapping and enslavement of labourers. However, the grass would not be always greener for the labourers even though the colonial Government would institute the indenture system as the labour laws would be mostly in favour of the employer than the employees.

The Kangani and Maistry systems are more or less similar and the terms differ in name. Both imply recruits from India to Southeast Asian plantations whereby this type of recruitment is known as Kangani system in Malaya and as Maistry system in Burma. The terms kangani or maistry denotes an overseer, a headman supervisor, or recruiter. The kangani also termed as kankani which designates a Tamil headman or male supervisor occurred in Sri Lanka and Malaysia. Both systems were abolished in 1938.

The kangani system started in the coffee and tea plantation of Ceylon, before it was introduced in Malaya in 1890. This system was based on the recruitment of labour from close ties, i.e. from extended families, kinship, caste, region and debt-bondage (Modi 2015:14). However, this type of system was known for malpractices, use of coercive, abusive and fraudulent methods since they were tempted by monetary gains offered by the plantation owners for each recruit (Heidemann 1992:59).

The Maistry system unlike the kangani system was more structured, hierarchically graded and had a well-defined labour relationship wherein the “Labour Contractor, the Head Maistry, the Charge Maistryand the Gang Maistry constituted the hierarchy of middlemen employers” (Modi 2015: 15-16). The main characteristic of the Maistry system was the recruitment of labourers to the middlemen-employers due to the debt-bondage system. Labourers were controlled through illegal deductions of wages and its payment by middlemen-employers. This system was described as highly exploitative and coercive as labourers had to work both day and night for a fixed wage without overtime payment.

It should be noted that under the Maistry system, labourers were supervised by the Maistry and not to the factory or rice farm owners, and the maistry had the power to dismiss labourers arbitrarily compared to the kangani system.

As from 1823, there was a Chinese-run “credit ticket” system, which advanced money for passage and expenses to Chinese migrating to Southeast Asia, Pacific Ocean and the Caribbeans. Up to 1842 emigration to the Malayan Straits, the Dutch East Indies, and the Philippines was largely conveyed in Chinese junks, but Chinese agents subsequently hired superior European vessels for the voyage to the straits, putting in place another essential piece of the long-distance contract labour trade. (Northrup, 1995:54). The ‘Credit Ticket’ system lasted until the 1880s.

Migration and the Indenture system

Indian migration is not a new phenomenon and has existed since the dawn of time mostly because of political, economic, social and commercial aspects. There are many explanations as to why Indian migration took place under slavery and indenture system, and one of the main reasons is purely economic. India likewise Africa offered a market for labour whereby demands and supply of labour became increasing. After the abolition of slavery, many colonies turned to India in search of free labour. Poverty, famine, caste issues and natural calamities compelled many Indians to migrate in search of better life and thus, being recruited on plantations in French and British colonies was a golden opportunity for them. Many migrated in mass with their

children and families to work on plantations. Between 1830s and 1917s, Indians migrated to colonies in the Indian Ocean, Africa, Caribbean, the South Pacific and Europe as indentured labourers

Mauritius was the first British colony to experiment free labour on a large scale known as the ‘Great Experiment’ and as from 1826 to 1910, more than 462, 800 indentured labourers came to work on the Mauritian soil. Indentured labourers originated from India, China, Madagascar, East Africa and Comoros Islands. Between 1826 and 1839, indentured labourers were mostly recruited under private enterprises and as from December 1842, when Indian immigration resumed, recruitment became official and was managed by the British Government. During the ban of Indian immigration between 1839 and 1842, Mauritian planters recruited labourers from Madagascar, East Africa and Comoros islands.

In 1849, the Immigration Depot namely the Coolie Ghat was set up to receive indentured labourers from different parts of the world. After the formal end of indenture in 1920s, the building was converted into various government offices. Later, with the establishment of the motorway and other infrastructural development, part of the immigration depot was destroyed. In April 1987, the Coolie Ghat was proclaimed a National Monument as it constituted an essential component of the cultural heritage of Mauritius. Shortly afterwards, the name of the Immigration Depot was changed from ‘Coolie Ghat’ to ‘Aapravasi Ghat’, because of the derogatory connotation attached to the word ‘Coolie’. It was not until November 1989 that the Cabinet decided that the “Coolie Ghat” be renamed “Aapravasi Ghat”, ‘Aapravasi’ meaning immigrants and ‘Ghat’, where water meets land, that is, the landing place of immigrants. It was in the same year that the Government of Mauritius took the initiative for the implementation of a plan for the restoration and development of the Aapravasi Ghat in order to pay tribute to the memory of the Indian indentured labourers and to preserve the monument as a historical site with whatever still existed on it as structures which would constitute the cultural heritage of the descendants of the Indian indentured labourers on the island.

In July 2004, there was the official launching of conservation project of the AG site and on 16th July 2006, the site was approved as a World Heritage Site by UNESCO mostly for its Outstanding Universal Value (OUV), and it also met criterion VI out of the ten selection criteria. As explained in the Operational Guidelines for the Implementation of the World Heritage Convention, criterion VI defines a World Heritage Site “to be directly or tangibly associated with events or living traditions, with ideas, or with beliefs, with artistic or literary works of outstanding universal significance”.

The successful use of indentured labour in Mauritius encouraged other British colonies such as Fiji, Guyana, Jamaica, South Africa and Trinidad to resort to the indenture system. As such, ‘free labourers’ were recruited in these colonies.

Likewise, Mauritius, Réunion Island, a French colony, also implemented the system of indenture before slavery was abolished. In April 1828, the schooner La Turquoise brought fifteen ‘telinga’ workers in the island. They originated from Yanaon, India, and were the sugar industry’s first indentured workers. Between 1848 and 1933, the colony received about 200,000 indentured labourers. In 1933, Réunion Island continued recruiting indentured labourers from Rodrigues Island. However, many of them protested against the working and living conditions and they were finally repatriated to their country of origin.

In contrast to Mauritius, Réunion Island commemorates the end of indenture each 11th November.

It must be noted that in contrast to other colonies such as the Caribbean, and Fiji, 2/3rd of the migrants in Natal were exclusively from South India.

Fiji was the last country to recruit indentured labourers in 1879, the year when Fiji became a British colony. Sir Arthur Gordon, who was the first British governor, initiated the introduction of indentured workers from India. Some 63,000 Indian labourers came to Fiji, of whom about 24,000 returned back to their country of origin. The majority of migrants to Fiji originated mostly from Eastern UP, the Purbi districts of Eastern UP.

According to Brij Lal, Indo-Fijian historian, it was in 1979 that the Fiji-Indians celebrated the hundredth anniversary of arrivals of Indian indentured migrants to Fiji, and since then, 14th of May which is the date when Indians came to Fiji as indentured labourers is marked by a girmit divas.

The unsuccessful attempts of importing and recruiting labourers from China and Africa compelled the Trinidadian Government to search for labour in India. And, the first Indian immigrants reached Trinidad and Tobago on Friday 30th May 1845 on board the Fath-al-Razack after sailing for 98 days from the port of Calcutta. There were 225 adults and 2 children on board. More than 145,000 indentured Indian immigrants landed in Trinidad, the great majority of whom arrived by 1850. By the time the indenture system ceased in Trinidad and Tobago, 2,500 Chinese, 18,000 Africans and 900 Europeans were employed as indentured labourers on the colony’s estates.

According to Radica Mahase, historian, it was in 1994 that the government of Trinidad and Tobago declared 30th May, a public holiday to commemorate of the arrival of Indian immigrants

in Trinidad known as Indian Arrival Day. The entire month of May is dedicated to Indian ancestors and celebrated as a Heritage month.

The first indentured labourers to be introduced in British Guiana were in May 1838 and they were 396 ‘hill coolies’ from northern India who came from Calcutta. Similar to Mauritius, allegations regarding abused and exploitation of these workers resulted in a temporary ban on Indian emigration to the colony. Shortly after the resumption of indentured migration, some 238,000 Indians reached British Guiana during the nineteenth and early twentieth centuries. As in Mauritius, the 1838 ban on the importation of Indian labourers prompted local planters to look for other possible sources of labour. In 1853, the first Chinese indentured labourers landed in British Guiana, they were recruited from Malacca, Singapore, Penang and Macao. Both the British and Chinese governments began to control the recruitment process in order to stop abuse of these workers, and they further encouraged families to immigrate to the colony. Most of the 13,533 indentured Chinese immigrants who reached British Guiana landed between 1860 and 1866. During the nineteenth century, more than 14,000 African and 32,000 European indentured workers also worked on the colony’s sugar estates.

The first Indentured Indian labourers reached Jamaica in 1845 upon the request of local planters. The Colonial Secretary in London informed the Emigration Agents in Calcutta and Madras who began the process of recruitment from India to Jamaica.

The Spanish colony of Cuba initiated recruitment of indentured labourers before the abolition of slavery in 1886. Most of these workers originated from East Asia, and between 1852 and 1874,

more than 125,000 Chinese labourers were hired as their services cost less than those of the slaves. They were engaged in the sugar industry and rubber, tobacco and coffee plantations as well as in the construction of railroads.

In 1838, a small batch of Indians was sent to Australia as indentured labourers and it was not until the 1860s that the country witnessed a major development in the agricultural sector. Samoa and Queensland became the main cotton producers to export cotton to textile factories in Britain and Europe. However, the American Civil War between 1861 and 1865 led to a disruption in the supply of cotton. Consequently, sugar and copra gradually replaced cotton plantations. The islands of Melanesia provided an important pool of workers for the Queensland sugar industry between 1863 and 1904 as well as for plantations in New Caledonia and Samoa

The Hawaiian sugar industry comprised of local workforce until the 1860s. However, low wages led to a decline of the local main-d’oeuvre which subsequently stimulated Hawaiian planters to recruit indentured labourers from Portuguese islands in the Atlantic Ocean and from Northern Europe but it proved to be unsuccessful. Attempts to introduce Melanesian and Micronesian workers also failed. Consequently, the planters turned to Japan and China for labour supply

The abolition of slavery in Peru in 1854 led to the recruitment of free labourers from China, Japan, and the Pacific Islands. More than 100,000 Chinese, 21,000 Japanese and 2,000 Pacific Islanders were recruited during the late nineteenth and early twentieth centuries. Labour was needed on sugarcane plantations, construction of railways and in the mining of guano which was used as fertilizers.

Ten years before the abolition of slavery in 1863, Suriname began importing labourers from China. Later, labourers were introduced from India and Java. The number of Indians and Javanese being recruited in Suriname was approximately 37,000 and 20,000 respectively. Only 2,800 Chinese and 500 Europeans were recruited. 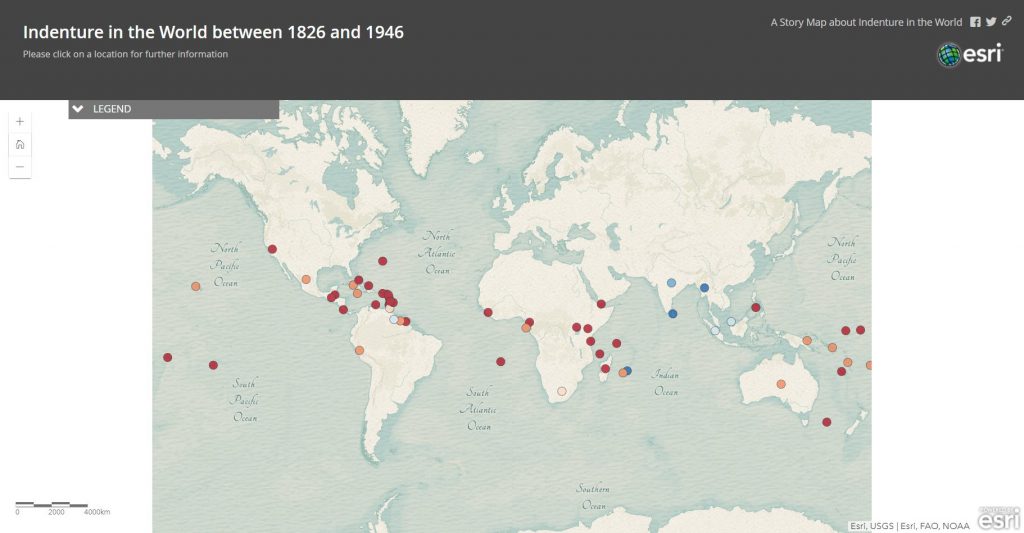